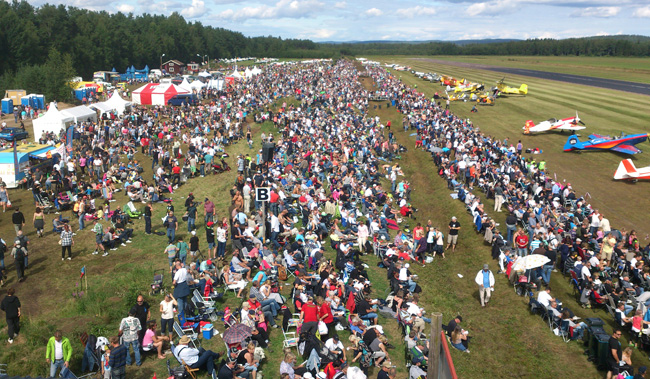 Flygfesten is one of the biggest air shows in Europe. We attract 50.000 attendees. At 5-7th of August we are back again. Flygfesten is an eventful weekend with world class pilots and airplanes. It will include first world war pioneer to the lates of modern airplane engineering, and everything in between.
Don’t miss the evening show on Friday -Only at flygfesten!

Flygfesten is an airshow that is arranged every three to four years in Sweden by Västerdalarnas Aero club, an aeroclub located in Dala-Järna in Vansbro municipality, with about 7000 inhabitants.

Flygfesten has since the re-launch in 1986 been arranged every three to four years. With a visitor volume between 35 000 and 40 000 spectators and an air show in top international class, our air show is considered one of the largest civil arranged air shows in Northern Europe.

Although the air show is our major focal area, our goal is to make Flygfesten more than just a regular air show. We want an event with a festival touch, where Saturday’s and Sunday’s air show is interspersed with evening entertainment during Friday and Saturday night in the form of dance, rock, disco and fun fair. All of it framed by a pleasant atmosphere.

Flygfesten is a non-profit arrangement and is held to promote the activity of the club in particular and to aviation in general. We offer a good forum for aviation enthusiasts to meet other likeminded, while it is a fine opportunity for us to recruit new club members.

We hope that a visit on Flygfesten will inspire you. If you are not already there, you might be tempted to start flying! At our exhibition area you will find representatives from our club who can answer questions about the club and the flying training we have to offer. We always welcome new members to our club!